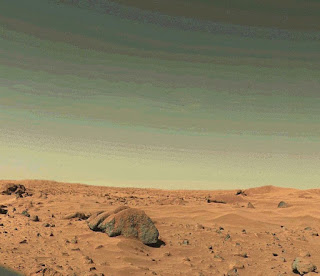 Researchers put data into sets of numbers, then analyzed the results for complexity
New analysis of 36-year-old data, resuscitated from printouts, shows that NASA found life on Mars, an international team of mathematicians and scientists conclude in a paper published this week.

Further, NASA doesn’t need a human expedition to Mars to nail down the claim, neuropharmacologist and biologist Joseph Miller, with the University of Southern California’s Keck School of Medicine, told Discovery News.

“The ultimate proof is to take a video of a Martian bacteria. They should send a microscope — watch the bacteria move,” Miller said.

Miller’s confidence stems in part from a new study that reanalyzed results from a life-detection experiment conducted by NASA’s Viking Mars robots in 1976.

Researchers crunched raw data collected during runs of the Labeled Release experiment, which looked for signs of microbial metabolism in soil samples scooped up and processed by the two Viking landers. General consensus of scientists has been that the experiment found geological, not biological, activity.

The new study took a different approach. Researchers distilled the Viking Labeled Release data, provided as hard copies by the original researchers, into sets of numbers and analyzed the results for complexity. Since living systems are more complicated than non-biological processes, the idea was to look at the experiment results from a purely numerical perspective.

They found close correlations between the Viking experiment results’ complexity and those of terrestrial biological data sets. They say the high degree of order is more characteristic of biological, rather than purely physical, processes.

Critics counter that the method has not yet been proven effective for differentiating between biological and non-biological processes on Earth, so it’s premature to draw any conclusions.

“Ideally, to use a technique on data from Mars, one would want to show that the technique has been well-calibrated and well-established on Earth. The need to do so is clear; on Mars we have no way to test the method, while on Earth we can,” planetary scientist and astrobiologist Christopher McKay, with NASA’s Ames Research Center in Moffett Field, Calif., told Discovery News.

While not iron-clad, the findings are an additional plank of evidence challenging the popular contention that Viking did not find life, Miller said.

Miller also is reanalyzing the data to see if there are variations when sunlight was blocked by a weeks-long dust storm on Mars, with the idea being that biological systems would have acted differently to the environmental change than geologic ones. Results of the research are expected to be presented in August.

The research is published online in the International Journal of Aeronautical and Space Sciences.