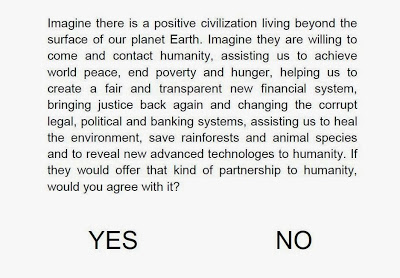 Our internet poll has shown that 90% of the awakened population (14,112 of 15,660 people who voted) is in favor of the Event taking place now and is at least theoretically willing to take risks that triggering the Event might entail.

Our street survey of the general population has brought similar results. Around 20 volunteers did »sociology research« in various locations on all five continents. I gave them the following instructions:

»The purpose is to conduct this survey on a busy street or inside a shopping center in a large or small city where you can stop many people anonymously. The purpose here is to get an accurate sample of the general human population. Do not search for awakened people or people of a certain age, gender or social status. Do not try to convince people into anything. Do not give any explanations about the Event, ETs, Cobra, the new financial system, etc. Do not try to convince anybody into participating in this survey, there are many that will be willing to stop for a minute and cooperate. Just say that you are conducting a street survey for a sociology research and you can then give them the document I attached to this email (of which you will make many copies) to those who are willing to cooperate. They can either circle an answer YES or NO. The goal is to collect between 200 and 1000 answers in the general area where you will be conducting the survey. Please send the results (numbers YES and NO) back to me as soon as possible.«

We collected 5853 valid answers, of which 5064 people circled YES. This means that almost 87% of the general surface population would be open to partnership with the Resistance and positive ET civilizations after the Event. It is interesting to note that results did not vary much across different countries and continents.

The petition did not bring expected results. Due to heavy interference from the Cabal, we have managed to gather only about 20,000 signatures.

Also, some people are wondering if this is just a »phishing scam« to gather names and addresses of people. No, it is not. Neither me nor the Resistance have any interest in gathering that kind of data. Also, if you worry about governments collecting that data, you can just switch off your cell phone and computer right now. They already have content of all your emails, all of your phone conversations, and your real time location whenever you have your cell phone near you. But do not worry again, all this is just raw data sitting somewhere in their computers and it is very unlikely any human being will ever look at it since all alphabet agencies have vast amounts of data to process every day to keep the Matrix running and too little time to look at it all.

If people can not handle a simple petition, how will they handle the Event? I can assure you, after the Event the comfort zones of everybody will be definitely expanded or challenged, one way or another.

It is very important for the signing process to continue despite the opposition. The number of signatures does NOT determine the timing of the Event, but more signatures can definitely help to ease the process energetically. You can sign the petition here:

Or help spreading the word through Youtube videos in 17 different languages:

Anonymous are supporting this petition through Op#Wings:

The RM2m special task force has evaluated the results of the poll, survey, petition and some other intel and has determined that most of the surface population would support the Event taking place now, but would not be willing to step out of their comfort zones and actively support the actions of the Light forces, at least initially.

The Resistance will trigger the Event when instructed from the Source, although they would like this to happen as soon as possible. They are fully aware that people have had enough and want to see some action.

One of the main problems is maintaining the system infrastructure in the first few hours after the Event is triggered and the arrests start taking place.

Years ago, key members of the Cabal have insured themselves against their removal from the surface of the planet by putting special computer code in the main programs that run industrial control systems which form the backbone of the current infrastructure (electricity, water, food production and distribution). This computer code requires special sections of those main programs to be updated daily by the key members of the Cabal signing in with fingerprint and iris identification. If only one key member of the Cabal fails to sign up or pushes the panic button, a virus is activated and it crashes the program, creating a cascade of disruptions in the infrastructure. Imagine what can happen if more of them fail to sign in:

Although the Resistance can now reset the financial system with a push of a button, its control of internet is not sufficient enough to guarantee a smooth running of the industrial control systems infrastructure in the first few critical hours after the Event. The Resistance is now dealing with this problem and it will be resolved.

The other problem is that most rich people got rich by their involvement with the Cabal one way or another and most of them have little secrets they don’t wish to expose. They might be fiercely against the Light forces after the Event is triggered, fearing to lose their little privileges. The Resistance suggests general amnesty to those who were not involved in deeply inhumane criminal acts and fair trial for the rest of them. The Resistance also suggest that they may keep all wealth which was gained in fair business endeavors and to share all unfairly gained wealth with the rest of humanity. Here is one fairly good proposal:

You can read about the newest developments regarding the financial reset here:

There is also a good article about debt offset. There is no direct link ( source website http://src-fla.us/index.php/news2e629 ), so I am quoting the article verbatim:

There are other factors delaying the Event but they will not be discussed now. They are being dealt with and I will speak about them when the time is right. The Event and the subsequent coming of the Golden Age is written in the very essence of our Soul and deep down we all know this is what we are here for. Doubts about the change and feelings of despair are artificially created by the etheric Archons and their technology in their last desperate attempts to slow down the process.

Regardless of appearances, final victory of the Light is near! 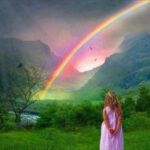 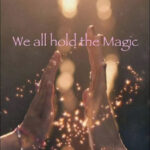